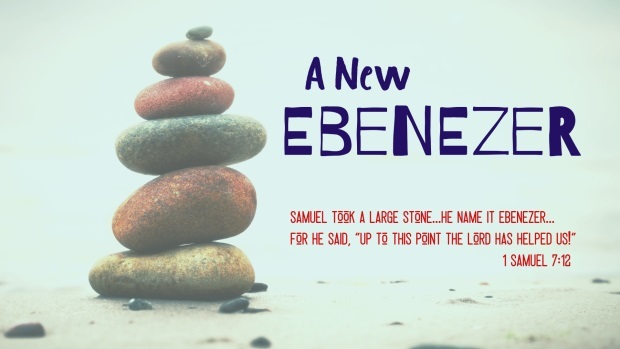 (Ebenezer: a “stone of help”, a physical reminder of God’s faithfulness and goodness)

Samuel then took a large stove and placed it between the towns of Mizpah and Jeshanah. He named it Ebenezer (which means “the stone of help”), for he said, “Up to this point the Lord has helped us!” 1 Samuel 7:12

Stone 1 - A place of Defeat

Have you ever been through a hard season in life? Maybe it lasted a few weeks, months, or even years. One of those seasons for me lasted for about three years. I entered into a time of deep depression, self-loathing, and apathy. I remember distinctly the day that I realized I was relapsing into depression (I had experienced it before, so the feelings were all too familiar.) In August of 2013, at a church leadership retreat, in the coastal mountains of Northern California, I felt the joy of life seep out me, like the waves pulling back to the deep of the ocean. And I knew that day I was entering an emotional and spiritual storm so intense that seeking immediate, ongoing help, was the only way I would survive…literally. That weekend retreat was a marker for me, a beginning point, the first stone in a hard journey.

Those joyless, thrashing, relentless waves battered at me for nearly a year. I was drowning in despair and hopelessness. I tried to lean into the support of my close friends, I sought out a counselor for weekly appointments, and I cried out to God. I needed to feel the shore beneath my feet, and the sun on my skin, but all I could see was giant, endless waves. My thoughts of insecurity and worthlessness overwhelmed me, and I was barely breathing in the deep expanse of my loneliness. Somehow, I managed to hold on to life through those tumultuous twelve months until it was August again.

Stone 2 - A Place of Lament

Now, it was 2014, and I was headed back to the very same retreat where I had been a year earlier when the downward spiral first started. I found myself desperate for a change, desperate to feel “normal” again, and angry at God for being so distant. I mean, I had been faithful. I was still serving on staff at my church, I was still trying to pray, I was still telling others about Jesus. So, to feel like God was so far away, like He wasn’t even hearing my cries made me bitter. Why, after a whole year of trying to take care of myself, was I still suffering? This place, this retreat, this “beauty” of the redwoods and ocean and hills, became a bitter reminder of the year before. It turned into a stone that bruised me. No - it was a jagged rock that tripped me and knocked me down. Maybe I would never recover from this depression.

What I couldn’t see was that God was ready to pull the scales off my eyes. He was about to reveal Himself to me in such a tangible way that I wouldn’t be able to deny His presence. God was preparing me to turn that stone into a memorial, an Ebenezer.

That first morning of that retreat God shook me. Sitting in a large circle with all the retreat attenders, we were asked the question. “How have you seen God working over the last year?” My immediate reaction in my heart was, “I haven’t. I don’t even know if God is near me, I don’t know if He still hears me.” I had hit the bottom. The deep, rough waves of despair had finally won, and I was helpless under the weight of defeat. My head fell down between my knees as the real tears began to flood out of my eyes. It was at that moment, when I couldn’t do any more from my own ability to save myself, that the Lord brought His word, and THE Word, to my heart. He gave me a picture, a vision, of my own body, curled up like an infant, crying, shivering, helpless. I could see myself lying there, but as the picture came more into focus, I could see that there was something underneath me. I wasn’t lying on my bed or the ground. No, I began to see that I was being cradled by two giant, capable, gentle hands…the hands of God.

Stone 3 - A Place of Victory

Then God said to my heart, “I never left you alone. I have always been holding you. In the midst of your suffering, your pain was so great, that it was all you could feel. You’ve always been in my hands.” At that moment God took that giant stone, that jagged rock was blocking my way, and He ground it down to sand. I opened my Bible to Psalm 139:17-18 and this is what I read:

How precious are your thoughts about me, O God. They cannot be numbered! I can’t even count them; they outnumber the grains of sand! And when I wake up, you are still with me!

Through all those months of thinking worthless thoughts about myself, God was thinking about me, too. But His thoughts were just the opposite of mine…they were precious thoughts! I had my new Ebenezer! I went to the beach that day and sat in the sand. I took off my shoes and dug my toes and fingers deep into the warm, soft, tiny particles that were once stone. His thoughts about me outnumber all that sand, and even outnumber the sand that I cannot see.

Though my journey is not over, and life is not perfect, I have an Ebenezer to remind me of God’s great love and care for me. My Ebenezer isn’t an item; it is a place. Each year when I return to that retreat center, I am reminded of how God has brought me through so far and am encouraged to know He will never leave me alone.

Joy to the World Training Is Stronger Than Trying Thankful